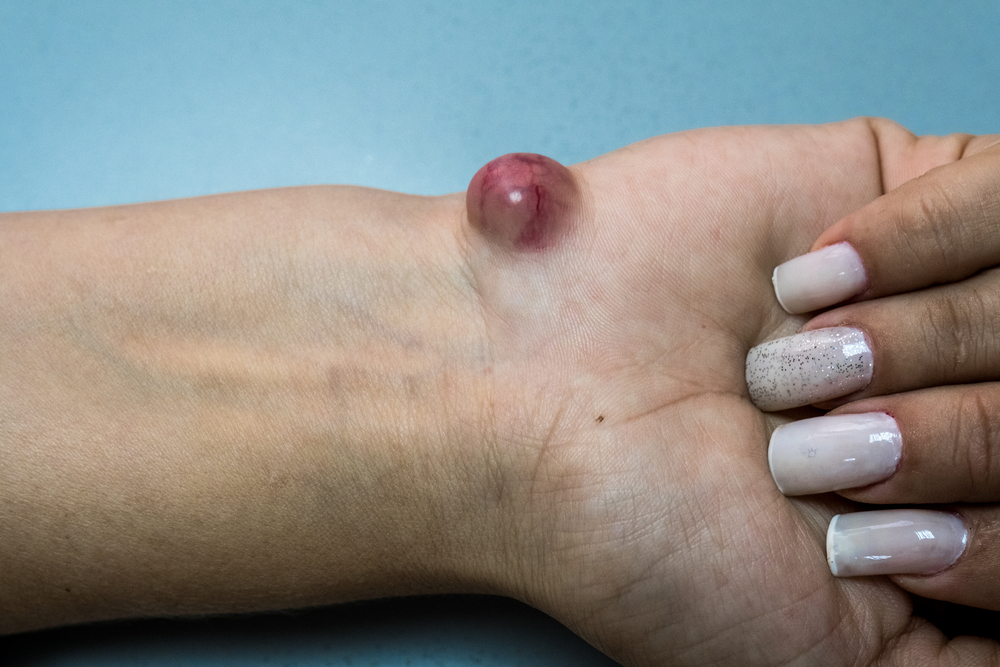 I know the word tumor (or cyst) sounds frightening as some could be cancerous and turn deadly.

I myself isn’t a fan of that word — but we all know that it is an unavoidable topic. We need to protect our own body, and knowing more about them is highly recommended.

According to the Google’s Trends, a website which tracks searches on the web using the rich data from the company’s popular search engine, the ‘interest over time’ for the term ‘tumor’ is high, as well as the related topic ‘cyst.’

There are many different types of tumors (or cysts), and their names usually describe their shape and origin.

In this article, we’ll focus on the tumor named Ganglion Cyst. Is it a severe condition? Should you worry when your body develops it?

What is a Ganglion Cyst?

According to Houston hand surgeon, Dr. Jeffrey E. Budoff MD, a Ganglion Cyst is a tumor or a swelling that may appear in the covering of a tendon in your body, or on top of a joint. Some of you may have seen people with bumps on their wrists — that may be a Ganglion Cyst.

Also known as the Bible Cyst, the Ganglion Cyst may start off small, like a pea, but it could grow to a size of a golf ball about 1.68 inches. The said cyst may appear like a sac of liquid. Inside, according to WebMD, the Ganglion Cyst has a thick, colorless, and jellylike material.

Interestingly, the cause of Ganglion Cyst is still unknown, but studies have proven that it can go away by itself.

Although your body could self-heal the Ganglion Cyst, it is important to know that it could affect your day-to-day activities once you have it, as it could grow to a size larger than a human eyeball.

Imagine you’re a writer, or a factory worker, using your bare hands as your prime tools to work. The bump may affect the locomotion of your wrist.

It is more common in women with 70 percent occurrence in people between 20 to 40 years old. It is also important to point out that Ganglion Cyst can, but rarely, occur in children 10 years old or younger.

How to Spot A Ganglion Cyst

It is common that the Ganglion Cyst will appear on the back of your hand, at your wrist joint. However, it could develop on the palm side of your wrist.

Medical websites, including the in-depth coverage published by WebMD, say that it could also develop on the palms, specifically at the base of the fingers. If you develop the cyst there, it will appear as small pea-sized bumps.

Also, watch your fingertips as it could develop the Ganglion Cyst, specifically below the cuticle. Scientists call it the mucous cyst.

Your body could also develop the said cyst on the outside of the ankle and knee and at the top of the foot.

As I’ve previously noted, the cause of the Ganglion Cyst is unknown, although there are suggestions made by the medical community. It is possible, according to several articles on the web, that it develops as trauma causes the tissue near the joint to break down, allowing the small cysts to develop. Then, it could grow larger forming a more obvious mass.

A theory also suggests that the joint capsule or tendon sheath has a flaw allowing the tissue near the joint to bulge out.

Removing the Bible Bump by Bashing

An article published by The BBC Future titled “should you bash the bible bump?” discusses the pros and cons of self-fixing the cyst.

The special health report reveals that there are videos posted on YouTube that tackle how you can get rid of the cyst — but researchers have found that “bashing” it could damage the surrounding tissue, making the matter worse.

Searching on YouTube for the term “ganglion cyst bashing” will pull about 800 results, with one video having over 380,000 views.

The recurrence rate of the Bible Bump returning is also high, found to be at about 22 to 64 percent.

Such methods to get rid of the Ganglion Cyst show possible success, but the so-called “redevelopment risk” is arguably high.

The feature from the BBC also reveals the good news of 45 percent of Ganglion Cyst disappearing by themselves after about six years. In some cases, after ten years, more than half have disappeared. So, some medical websites and blogs suggest that if you develop it, but it’s not affecting your day-to-day job, or it is not causing you pain, and have confirmed with medical care that it is not cancerous, then you just wait and see if it goes away.

It is, of course, safe to say that removing the cyst with medical care is safer. Your doctor can check the bump and confirm if it’s a Ganglion Cyst before proceeding to giving you the best possible treatment.

There are exams and tests needed to diagnose the bump. To confirm if it’s the said cyst, your doctor may use a syringe to get some fluid from it. They could also use ultrasound to check if it is solid or fluid-filled (cystic). The latter could also determine whether it is the blood vessel or the artery that is causing the lump.

In some cases, doctors could also send the patient to a hand surgeon if the cyst is large or solid.

Stairlifts promise new freedom for you or your loved one...
Medical & Health

Does Medicare Pay for Assisted Living?

When you are looking into assisted living for a loved...