What Is a Dhow Cruise in Dubai? 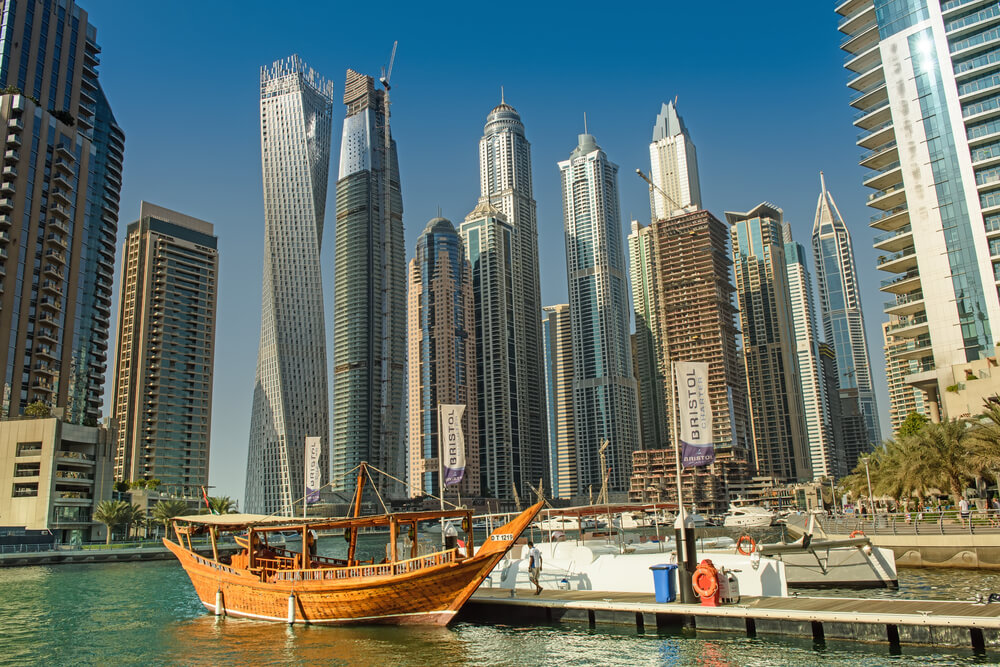 In the past, dhows were used by the Arabs to tread the Indian Ocean in search of pearls and other means of livelihood. Fast forward to the present, a dhow cruise is one of the most spectacular ways to witness the dazzlingly beautiful juxtaposition of Dubai’s past and present.

A press release issued by Dubai’s Department of Tourism states that it has been their mission since the end of the 1990s to place the country as a top destination for cruise tourism, thus establishing Dubai Cruise Tourism. Cruise tourism includes both huge cruise ships that tour the Emirates and these elegant dhow cruises that showcase the grandeur of the Dubai Canal and Dubai Marina.

What Exactly Is a Dhow Cruise?

When you say “dhow”, your brain probably automatically conjures images of a small historic Arab sailing vessel with its sail flapping vigorously to every gust of the wind. While the dhow was indeed an important part of the Arabs’ lives, it’s not exactly cruise ship material. The vessel they use for the famous cruise is a modernized rendition of the historic dhow that can safely transport passengers in luxury and style.

Dhow cruise is offered in 2 areas: Dubai Marina and Dubai Creek. Either cruise lasts 2-2.5 hours and allows you to admire the beauty of modern architecture in Dubai Marina or the colorful infrastructure of a bygone era on Dubai Creek. Dubai is a ravishing sight any time of the day but the real magic happens in the evening when the night sky illuminates the waters and the city lights beam in full resplendence.

What Are the Sights that You Can Enjoy on Your Dhow Cruise?

The breathtaking historical and modern sights of Dubai can be best appreciated while traversing the waters of the Persian Gulf. High-rise buildings, unique infrastructure, and sophisticated residential areas are a wonder in themselves, but the more celebrated stars of the sightseeing show are Atlantis The Palm, Dubai Marina Yacht Club, Dubai Marina Mall, Palm Jumeirah, and the world-famous Burj Al Arab. In the old cities of Deira and Bur Dubai, on the other hand, are iconic sights that make up Dubai’s rich history such as the Gold and Spice Souqs, Grand Mosque, Sheik Saeed Al Maktoum House, the Heritage Village, and Old Boat Fort.

What Are the Inclusions of a Dhow Cruise?

As explained by the Alexandra dhow cruise website (https://dhowcruise.net/), there’s more to dhow cruises than just sightseeing. The basic idea is that the higher the cost of the cruise, the more extravagant the inclusions are. A romantic dinner is one of the most sought-after dhow cruise attractions. Being a multicultural city, the cuisine offered on board varies. If you have the cash to splurge, you can choose an impeccable 5-star buffet dining experience to highlight the experience. The Alexandra dhow cruise in the Dubai Marina is one of the top-rated dhow cruises in Dubai.

As if the lights and sights weren’t enough to entertain you, there is a variety of entertainment offered on board. A cultural show affords you a glimpse into the colorful heritage of the Arabs while a variety show with a band is great for squeezing in some laughs. Luxury dhow cruises feature classical and jazz music, a perfect accompaniment to a romantic dinner under the Dubai night lights.

Travel agencies offer various dhow cruise packages to include other popular attractions such as desert safari, dolphin-watching, pearl-dive watching, and city tour – a convenient way to enjoy the city’s offerings in just a day or two.

How Much Is the Cost of a Dhow Cruise?

According to travel website Viator, you can go on a dhow cruise for as less than 6 dollars and for a splurge, luxury dhow cruises can cost as much as 70 dollars. Of course, the rate goes up as you avail of more inclusions such as a safari, city tour, or dolphin watching. Morning cruises are significantly cheaper than evening cruises but both are definitely worth trying.

Fun fact: you can ride a dhow for less than 30 cents and this should take you from the pier to a specific point on the creek such as the Gold and Spice Souqs. It’s not so much a cruise as a commute but it’s a nice way of getting around if you’re on a tight budget.

How Should You Choose the Perfect Dhow Cruise for You?

There a few considerations when choosing the best dhow cruise for you but the most important thing to consider is where your interests lie. Are you a history buff? If so, a morning cruise along Dubai Creek is the best for you as it showcases a rich part of Dubai’s heritage.

If you’re an architecture fan, a day cruise along Dubai Marina will amaze you. If you’re going for a romantic time with your significant other, an evening cruise under the magnificent Dubai skyline complete with dinner and music will do the trick for you.

Birmingham is one of those travel destinations with something to...
Events

What are the Best Corporate Event Themes?

Corporate events can be a great way to show appreciation...
Events

How to Book a Food Truck

When you’re planning any type of event, there is a...

Can You Use A Dimmer Switch on Flourescent Lights?

Before understanding the truth behind this concept, I often wonder and ask myself if one can dim fluorescent light. Well,…